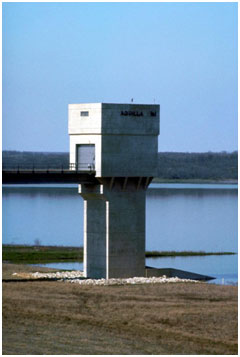 Aquilla Lake is located approximately seven miles southeast of Hillsboro or approximately twenty-three miles north of Waco in Hill County, on Aquilla Creek and Hackberry Creek, tributaries of the Brazos River.  The dam is part of the overall flood control project in the Brazos River basin.  The lake is owned by the U.S. Government and operated by the U.S. Army Corps of Engineers under contract with the Brazos River Authority for water supply, flood control, and recreation purposes.  Construction of the dam began on June 14, 1978 and was completed on May 16, 1983.  Deliberate impoundment began April 29, 1983.  The dam is formed by a rolled earthfill embankment with a crest length of 11,890 feet, a top width of 38 feet, and a maximum height above the streambed of 104.5 feet. The top of the dam is at an elevation of 582.5 feet above mean sea level, while maximum design water surface may reach to 577.5 feet above mean sea level. A reinforced concrete inlet structure near the center of dam houses the flood-control gates and operating equipment.  A 1,200 foot overflow emergency spillway is located on the left abutment and has an elevation of 564.5 feet above mean sea level at its crest.  At the top of the flood control pool, elevation 556.0 feet, the lake will cover approximately 7,000 surface acres and store approximately 146,000 acre feet of water. According to TWDB volumetric survey in July 2014, Aquilla Lake has a total reservoir capacity of 43,279 acre feet and encompasses 3,084 acres at conservation pool elevation (537.5 feet above mean sea level, NGVD29). The dam controls a drainage area of about 252 square miles.