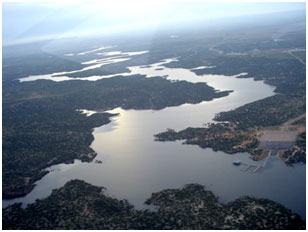 Alan Henry Reservoir (also known as John T. Montford Dam and Lake Alan Henry) is located about ten miles east of Justiceburg and about sixty-five miles southeast of the City of Lubbock, on the border of Garza and Kent Counties, and is impounded on the South Fork of Double Mountain Fork of the Brazos River, a tributary of the Brazos River.  The City of Lubbock owns and operates the reservoir for water supply, irrigational, and recreational purposes.  Planning for this reservoir began in the 1960's to meet the City of Lubbock's projected population growth.  Water Right Permit No. 4146, granted on August 6, 1984, authorized the construction of the dam and the reservoir.  The construction began in 1991, and was completed in October of 1993 in cooperation with the Brazos River Authority.  The reservoir/lake is named in honor of former Lubbock Mayor Alan Henry for his untiring efforts toward the goal of securing an additional water supply for Lubbock's residents.  However, the dam is named in honor of the Texas Senator John T. Montford, who represented the Lubbock area and was instrumental in passing the needed legislation to create Alan Henry Reservoir.  The dam is an earth-fill embankment of about 4,150 feet in length with a maximum height of 138 feet and width of 1,000 feet at its base.  The top of the dam is at an elevation of 2,263 feet above mean sea level. Maximum design water surface may reach 2,245 feet above mean sea level. The uncontrolled emergency spillway was cut over natural ground with a crest at an elevation 2,240 feet above mean sea level. The service spillway is a concrete structure with a crest at an elevation of 2,220 feet above mean sea level. According to TWDB 2017 survey, at the top of conservation pool elevation, 2,220 feet above mean sea level, the reservoir will store 96,207 acre feet of water with a surface area of about 2,800 acres.  The dam controls a drainage area of about 394 square miles.