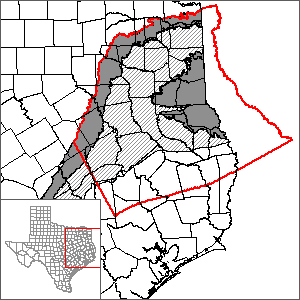 In 2017, the Texas Water Development Board (TWDB) contracted with GSI Environmental, Inc. to update the groundwater availability model of the northern part of the Carrizo-Wilcox, Queen City, and Sparta aquifers in Texas. A final report and model will be released in late 2020.

In 2002, the TWDB contracted with Intera, Inc. (who teamed with Parsons Engineering Science, Inc., Waterstone Environmental Hydrology and Engineering, Inc., and several individual experts) to develop a model of the northern portion of the Carrizo-Wilcox Aquifer in Texas. A final report and model were delivered in 2003.

Send us an email if you would like to receive SAF notifications.

Groundwater Availability Model for the Northern Part of the Carrizo-Wilcox Aquifer in Texas (2003).

Please see the Carrizo-Wilcox, Sparta, and Queen City aquifer pages for other reports and publications.