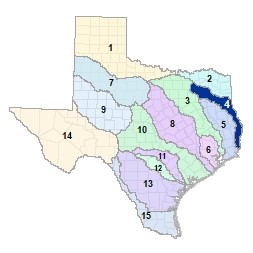 Originating in Collin, Rockwall and Hunt counties, the Sabine River and its many contributing creeks and bayous meander southeast to the Texas-Louisiana border. The Sabine becomes the border between the two states in Panola County where the river turns south and crosses through the Sabine National Forest on its journey to the Gulf of Mexico. The Sabine merges with the Neches River at Port Arthur on Sabine Lake and their combined flow enters the Gulf of Mexico through Texas Point National Wildlife Refuge. Smaller streams within the Texas portion of the basin include Cow, Big Sandy, and Fork creeks and the South Fork of the Sabine River. 12 major lakes and reservoirs are found in this region.

Please see the RFPG Meeting Schedule webpage for information on the past and upcoming meetings.