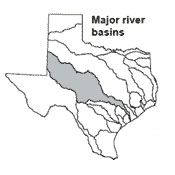 The Colorado Basin is the third largest river basin by area within Texas.  The basin's namesake river derives its name from the Spanish word for "red." The Colorado River flows from Dawson County to Matagorda Bay and the Gulf of Mexico.  The second longest river in Texas, the Colorado River is only the sixth largest by average annual flow volume.

A large portion of the basin is located within relatively arid regions of Texas, resulting in a low average watershed yield.  Other water courses in the basin include the Concho, Llano, Pedernales, and San Saba rivers; Pecan Bayou; and many creeks, such as Beals, Champion, Elm, Oak, Onion, and Redgate creeks.  Balancing human water demands and environmental needs is an important issue in the basin.