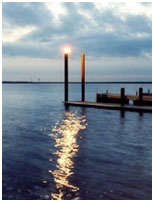 Lake Walter E. Long (also known as Decker Lake) is located in east of Austin in Travis County, on Decker Creek, a tributary of the Colorado River.  The lake is named after Walter Ewing Long (1886–1973), businessman and civic leader who had helped organize the Colorado River Improvement Association, which evolved into the Lower Colorado River Authority and built the dams forming what is now the Highland Lakes chain.  The dam and the lake are managed by the City of Austin for a power plant cooling and recreational purpose.  Construction of the dam started on May 15, 1966 and was completed in October 1967.  Deliberate impoundment of water began January 1967.  The dam is an earthfill embankment of 6,390 feet long with a maximum height of 83 feet.  The lake has a capacity of 33,940 acre-feet encompassing a surface area of 1,269 acres at conservation pool elevation of 555 feet above mean sea level.  The drainage area above the dam is approximately 9 square miles.  Water level can be maintained by pumping from the Colorado River if it is needed.