Texas has 367 miles of coastline within which 21 river basins terminate, bringing fresh water from surface run-off, rivers, and streams into individual bays.  Here, bounded by barrier islands, the mixing of freshwater and seawater in these bays forms estuaries.  Texas has seven major and five minor estuaries ranging from the nearly fresh Sabine Lake, which borders Louisiana, to the frequently hypersaline Laguna Madre along the southern coast.  Although each estuary differs in size, hydrologic, and ecological characteristics, together they support a diverse array of species which serve as the raw materials for a variety of economic activities associated with commercial and recreational fishing, hunting, and birding.  In addition, they provide many other ecological services, such as water filtration and the regulation of nutrients through nutrient cycling or storm surge protection and shoreline stabilization through the trapping of sediments and building-up of fringing wetlands.

The quality, quantity, and timing of freshwater inflow from rivers is important to maintaining the natural salinity, nutrient, and sediment loading regimes which support the unique biological communities of each estuary and also to ensure healthy ecosystem function.  As the state's population grows, increasing demands for water may limit the volume of freshwater reaching the bays as well as alter the quality or timing in which the water arrives, thus impacting the productivity and characteristic of Texas estuaries.  The TWDB's Bays & Estuaries Program mission is to maintain a continuous data collection, modeling, and analytical study program focused on evaluating the freshwater inflow requirements necessary to maintain the health of Texas bays and estuaries. 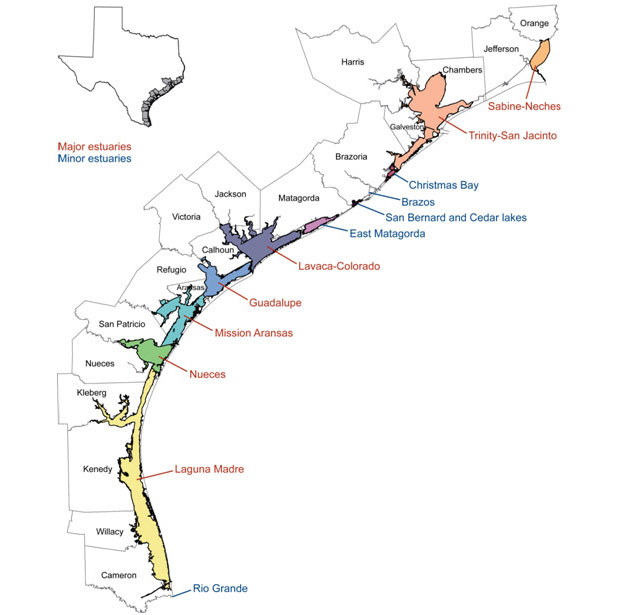