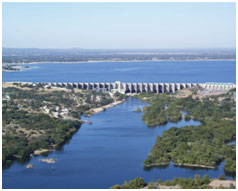 Lake Buchanan and Dam (also known as Hamilton Reservoir and Dam) are located about ten miles northwest of Burnet in Burnet and Llano counties, on the main stem of the Colorado River.  The projects is owned and operated (together with other downstream lakes as a system) by the Lower Colorado River Authority (LCRA) for flood control, water supply, hydropower generation and recreational purposes.  The site of Buchanan Dam was originally identified by Adam Johnson, a Burnet County surveyor and stage driver, who sketched a dam for this location in the 1850's.  But it wasn't until April 1931 that construction of a dam at this location began, when a Texas subsidiary of the Chicago based Insull utility company began construction on Hamilton Dam.  A year and a half later, the utility company went bankrupt, leaving the dam less than half-built.  Alvin Wirtz became receiver of the bankrupt utility company's assets, and found funding to finish the dam from the federal government, provided one condition: that the money go to a public agency created and owned by the State of Texas.  In 1933, Wirtz drafted legislation creating a Colorado River Authority.  However, pressure from private utilities and West Texas Water interests caused the bill to fail in the Texas Legislature three times before Gov. Miriam A "Ma" Ferguson arranged a compromise for the authority to control only the lower portion of the river.  Hence, through the passage of the LCRA Act, the Lower Colorado River Authority (LCRA) was created on November 13, 1934, with authority to store and sell water, generate electricity, prevent flood damages, and implement reforestation and soil-conservation programs.  The LCRA began reconstruction on the dam on February 19, 1935.  Deliberate impoundment of water began on May 20, 1937 and the dam was completed in 1938.  The first generator began operation in January of 1938.  In 1934, Hamilton Dam was renamed Buchanan Dam after U.S. Rep. J.P. Buchanan, who had secured the funding to build the dam and lake.  The dam is a multiple concrete arch and gravity structure measuring 11,200 feet long and 145 feet high. The elevation at the top of arches is 1025.5 feet above mean sea level. Maximum design water surface may reach to 1024.0 feet above mean sea level. The crest of uncontrolled emergency spillway (far left of dam or north end) is at elevation of 1020.5 feet above mean sea level, while the top of gates at 3 gate-controlled spillways is at elevation of 1021 feet above mean sea level. According to LCRA, recorded historical high water level is 1021.4 feet above mean sea level on December 20, 1991, while 100-year design flood stage is 1,021 feet above mean sea level. According to TWDB 2006 survey, the reservoir has a capacity of 886,626 acre-feet encompassing a surface area of 22,137 acres at the original conservation pool elevation of 1,020.5 feet above mean sea level.  Currently, Lake Buchanan is operated at two normal pool levels, 1,018 and 1,020 feet above mean sea level, for May-October and November-April, respectively. The drainage area above the reservoir is 31,250 square miles, of which 11,900 square miles are probably noncontributing.