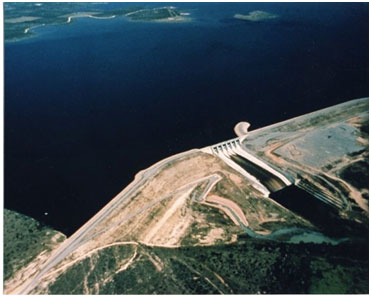 O. H. Ivie Reservoir (formerly known as Stacy Reservoir) and the Simon. W. Freese Dam is located five miles north of Millersview in Coleman County and extended in Concho, Coleman, and Runnels counties, on the Colorado River just sixteen miles below the confluence of Concho River and the Colorado River.  The project are owned and operated by the Colorado River Municipal Water District for water supply and recreational purposes.  Although the site had been interested for a reservoir for a long time, it was until May 14, 1985 when the Texas Water Commission granted permission to build the reservoir.  It was to be named for the Stacy settlement, but it was later decided instead to honor the water district's general manager, O. H. Ivie, and to name the dam for Simon W. Freese, a Fort Worth engineer whose firm had worked on major reservoir projects since 1949.  Construction of the dam started in May 1987 and was completed in March 15, 1990.  Deliberate impoundment began 1990.  The dam is a rolled earth embankment of 15,950 feet in length and 148 feet of maximum height. The top of the dam is at elevation of 1,584 feet above mean sea level. The uncontrolled emergency spillway has a crest at elevation of 1,562 feet above mean sea level. The service spillway is controlled by six tainter gates and is concrete-gravity ogee weir with a crest at elevation of 1,551.5 feet above mean sea level. The reservoir has a storage capacity of 554,340 acre-feet encompassing a surface area of 19,149 acres at the conservation pool elevation of 1,551.5 feet above mean sea level.  The drainage area above the dam is 12,647 square miles.