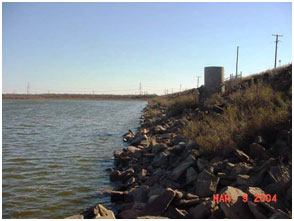 Lake Colorado City and Colorado City Dam (also known as the Morgan Creek Dam) are located four miles southwest of Colorado City in Mitchell County, on Morgan Creek, a tributary of the Colorado River.  The reservoir is owned and operated by the Texas Electric Service Company for water supply, cooling to power station and recreational purposes.  Authorization (Water Right Permit No. 1475) for this reservoir was issued by the State Board of Water Engineers on December 21, 1948.  Construction of the dam started at the same time and was completed in September 1949.  Deliberate impoundment of water began April 1949.  Use of water for power plants and condenser-cooling purposes began in June 1950.  The dam is an earthfill embankment of 4,800 feet long with a maximum height of 85 feet.  The top of the dam is at elevation of 2,090 feet above mean sea level. The uncontrolled emergency spillway is located at the left end of the dam, with its crest at elevation of 2,073.4 feet above mean sea level. The service spillway is also uncontrolled drop inlet (double rectangular) with its crest at elevation of 2,070.2 feet above mean sea level. According to a survey done by the owner in 1964, the lake has a normal capacity of 31,805 acre-feet encompassing a surface area of 1,612 acres at conservation pool elevation of 2,070.2 feet above mean sea level.  The lake drains a catchment area of approximately 322 square miles, of which thirty-two square miles are probably noncontributing.  When the lake's water level is low, water is pumped from Champion Creek Reservoir to maintain a satisfactory operating level.