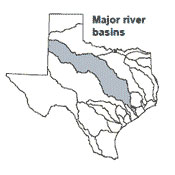 The Brazos Basin is the second largest river basin by area within Texas.  The basin's namesake river was named Los Brazos de Dios, "the arms of God," by early Spanish explorers.  The Brazos River flows from the confluence of its Salt and Double Mountain forks in Stonewall County to the Gulf of Mexico.  It is the state's third longest river and has the largest average annual flow volume of any river in the state.

Other streams in the basin include the Salt, Double Mountain, and Clear forks of the Brazos River; Gabriel, Lampasas, Little, Leon, Navasota, Nolan, Paluxy, Sabana, and White rivers; and many creeks such as Big Sandy, Cedar, Millers, Salt, Sweetwater, and Yegua creeks.  One of the issues in this basin is the increasing demand on surface water resources in the upper basin as groundwater supplies decline, particularly in the Ogallala Aquifer, which has historically supplied the majority of water there.