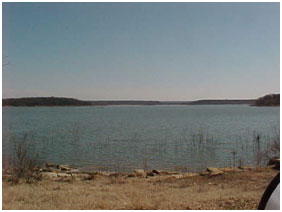 Lake Daniel (also known as Gonzales Creek Dam) is located 7 miles south of Breckenridge in Stephen County, on Gonzales Creek a tributary of Clear Fork Brazos River, which is tributary to the Brazos River.  This reservoir is owned by the city of Breckenridge for municipal and industrial water supply.  Water Right Permit (No. 1388 (Application No. 1488) was issued by the State Board of Water Engineers to M. E. Daniel for construction of this reservoir on June 10, 1946.  Construction of the dam began December 15, 1947, and was completed on September 1, 1948.  Delibrate impoundment began at that time with only small inflow available.  On October 5, 1948, the water rights and the facilities were transferred by deed to the city of Breckenridge.  The lake filled the first time in June 1949.  The contractor for the project was Brazos Valley Construction Company.  The cost of the Gonzales dam was $204,819, and cost of the project was $363,000.  A small diversion dam and pumping equipment installed near the city were placed in operation in March 1951.  The Dam is 2,655 feet long and 60 feet high.  Lake Daniel has a capacity of 9,515 acre-feet with a water surface area of 924 acres at elevation 1,278.0 feet above mean sea level. The dam controls a drainage area of approximately 115 square miles.