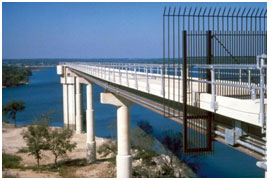 Georgetown Lake and the North San Gabriel Dam (formerly known as North Fork Lake or Georgetown Dam) are located approximately 3.5 miles west of the city of Georgetown in Williamson County, on the North Fork of the San Gabriel River, a tributary of the Brazos River.  The lake and dam facility are owned by the United States Government, and maintained and operated by the U. S. Army Corps of Engineers, Fort Worth District (COE) for the water supply, flood control and recreational purposes. Flood Control Act of 1962 (PL 87-874) (HD 591/87/2) authorized a reservoir system consisting of Lake Georgetown, Granger, and the South Fork Lakes on October 23, 1962.  State's authorization for this reservoir was issued to Brazos River Authority on July 23, 1964.  The project of Lake Georgetown initiated in 1968.  Construction of the dam began in 1972 and was completed in 1979.  Deliberate impoundment of Lake Georgetown begins March 3, 1980 and the Lake and associated facilities were officially finished in 1982.  The rock-fill dam has a length of 6,947 feet (including the uncontrolled spillway) with a maximum height of 165 feet and a top at elevation of 861 feet above mean sea level. Maximum design water surface may reach to 856.2 feet above mean sea level. The uncontrolled spillway (broad-crested weir) is located in the middle of the dam with a crest at elevation of 834 feet above mean sea level. According to original data from U.S. Army Corps of Engineers, the lake can hold up 130,800 acre feet of water encompassing a surface area of approximately 3,220 acres at the top of flood control pool, elevation of 834 feet above mean sea level. According to TWDB 2005 volumetric survey, Lake Georgetown had a volume of 36,904 acre-feet and a surface area of 1,287 acres, at conservation pool elevation, 791.0 feet above mean sea level.  The dam controls a drainage area of approximately 246 square miles.