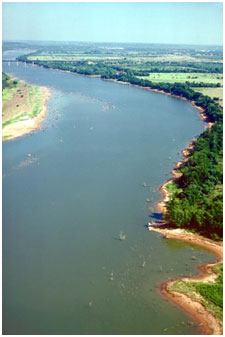 Whitney Lake and Whitney Dam are located about two miles from Whitney on the boundary line of Hill County and Bosque County line, on the Brazos River main stem.  The reservoir is owned by the United States Government and operated by the United States Corps of Engineers, Fort Worth District for multi-purposes including flood control, municipal water supply, irrigation, recreation and power production.  Whitney Lake was originally authorized by Congress under the Flood Control Act of August 18, 1941.  However, when the U.S. became involved in World War II, the funding was taken away because all resources were needed for the war effort.  The construction was authorized again in the Flood Control Act of December 22, 1944.  Construction began on May 12, 1947, as part of the Brazos River Conservation and Reclamation program, and was completed in April 1951. Deliberate impoundment of water started December 10, 1951.  Construction of the powerhouse began in April 1951 and was completed in June 1953.  The dam consists of a concrete gravity structure and earthfill embankment that is 17,695 feet long. The tops of the dam are at elevation of 584.0 feet and 580.0 feet above mean sea level for the concrete dam and the earth embankment, respectively. The maximum design water surface is 573.0 feet above mean sea level. Top of the flood control pool is defined at an elevation of 571.0 feet above mean sea level. The Spillway Crest (top of ultimate power pool) is at an elevation of 533.0 feet above mean sea level. According to TWDB 2005 survey, the lake has a capacity of 554,203 acre-feet and a surface area of 23,220 acres at its conservation pool elevation of 533.0 feet above mean sea level.  The drainage area above the dam is 27,189 square miles, of which 9,566 square miles is probably noncontributing.