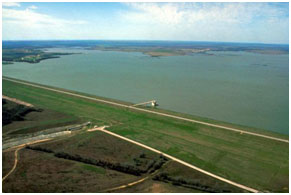 Granger Lake, formerly known as Laneport Lake, is located approximately seven miles east of the city of Granger in Williamson County, on the San Gabriel River, a tributary of the Brazos River.  The dam and lake were built and are owned by the United States government, and operated by the U.S. Army Corps of Engineers for flood control, water supply, and recreational purposes.  Authorization to build Laneport Lake was originally approved in the Flood Control Act by the U. S. Congress on September 3, 1954.  Construction began in 1972 and completed in 1977.  Deliberate impoundment started in the same year.  However, operation began in 1980.  The earthfill dam, including the spillway, is 16,320 feet long with a maximum height of 115 feet above the streambed. The top of the dam is at an elevation of 555 feet above mean sea level. Maximum design water surface may reach 550.3 feet above mean sea level. The uncontrolled emergency ogee type spillway is located to the south end of the dam with the crest at an elevation of 528 feet above mean sea level. At the top of the flood control pool elevation, 528 feet above mean sea level, the original lake can store a total of 244,200 acre feet of water encompassing a surface area of 11,040 acres. According to TWDB 2013 volumetric survey, the top of the conservation pool, at an elevation of 504.0 feet above mean sea level, the lake would cover 4,159 surface acres and store 51,822 acre-feet of water.  The dam controls a drainage area of approximately 709 square miles.