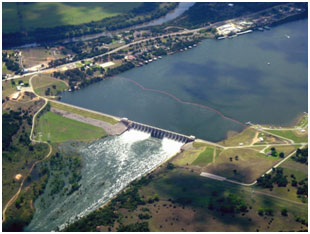 Lake Granbury and De Cordova Bend Dam is located about 8.3 miles in southeast of Granbury in Hood County, on the Brazos River.  The Brazos River Authority owns the lake and operates the facilities for municipal, industrial, irrigational supplies and recreational purposes.  The lake and its dam were first proposed by the Authority in the late 1950s.  Construction on the De Cordova Bend Dam began on December 15, 1966.  The dam was named for De Cordova Bend, a prominent bend in the Brazos River in that area, originally named for land agent and entrepreneur Jacob De Cordova1.  Impoundment of water began on September 15, 1969.  The dam, composed of Ambursen-type concrete and earthfill, was 2,200 feet long and 84 feet high with a top width of 17 feet.  According to 2015 TWDB hydrometric survey, the top of the dam has an elevation of 706.5 feet. The emergency spillway is located in the left side of the dam and is controlled by 16 tainter gates (each 36 by 35 feet) with its crest (or sill of the gates) at elevation of 658 feet. Lake Granbury, characterized by its long and narrow water body, has a total capacity of 136,326 acre-feet and surface area of 8,281.6 acres at the conservation pool elevation or top of gates, 693 feet (based on information provided by the Brazos River Authority in 2016, all above elevations are measured based on local datum which is 1.11 feet below the NGVD29 datum).  The dam controls a drainage area of approximately 25,679 square miles.  However, contributing drainage area is about 16,113 square miles.