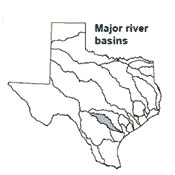 The San Antonio Basin is relatively modest in both size and average annual watershed yield.  Early Spanish explorers named the basin's namesake river after San Antonio de Padua, "Saint Anthony of Padua."  From its spring-fed headwaters in Bexar County, the San Antonio River flows to its confluence with the Guadalupe River near Tivoli.  Other streams within the basin include the Medina River and Leon, Salado, Calaveras, and Cibolo creeks.

The overall limited water supply is an important issue in the basin.  Groundwater has historically supplied the majority of water used in the basin, but overpumping has reduced base flows in rivers and in several springs that are home to threatened and endangered species.  Despite conservation efforts, municipal water demands are expected to increase due to population growth, particularly within the city of San Antonio.