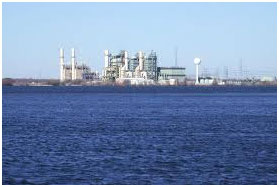 Victor Braunig Lake (formerly known as East Lake) is located about fifteen miles southeast of San Antonio in Bexar County, on Arroyo Seco, a tributary of the San Antonio River. The Lake is owned and managed by CPS Energy of San Antonio (City Public Service) for cooling to a complex of power plants and recreational purposes. Authorization (Water Right Permit No. 1990) was issued by the State Board of Water Engineers on August 21, 1961. Construction of the dam started on June 6, 1961 and was completed in December 1962. Deliberate impoundment of water began when pumping from the San Antonio River began soon after. Power generation started in April 1966.

The dam is an earthfill embankment of 9,647 feet long with a maximum height of 80 feet. The reservoir has a capacity of 26,500 acre-feet encompassing a surface area of 1,350 acres at the conservation pool elevation of 507 feet above mean sea level. The drainage area above the dam is only 9.4 square miles. Water level is maintained by pumping from the San Antonio River.