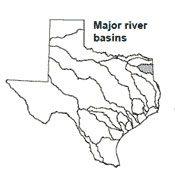 The Cypress Basin is one of the smallest major river basins in Texas.  However, because of high precipitation and low evaporation rates in the region, the basin has a large average watershed yield.  Cypress Creek (sometimes called Cypress Bayou) flows from headwaters in eastern Hopkins County to its confluence with the Red River in Louisiana.

Along the way, it flows through Caddo Lake, one of the state's only natural lakes.  Other streams in the basin include Big Cypress, Black Cypress, and Little Cypress creeks.  Because it is a tributary watershed of the Red River, surface water within the basin is apportioned by the Red River Compact between Texas, Oklahoma, Arkansas, and Louisiana.  Protecting environmental resources and water quality are important issues in the basin.