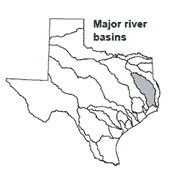 The Neches Basin is the third largest river basin whose watershed area is entirely within Texas and the fourth largest by average flow volume.  Named by early explorers after the Neches Indian Tribe, the Neches River flows from headwaters in Van Zandt County to its confluence with Sabine Lake, which drains to the Gulf of Mexico.  Smaller rivers and streams within the basin include the Angelina River, Village Creek, and Attoyac, Ayish, and Pine Island bayous.  The basin is an important source of surface water supply for growing cities outside the basin.  Balancing environmental needs with continued development of surface water supplies is an important issue in the basin.