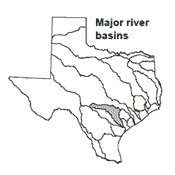 The Guadalupe Basin is the fourth largest river basin whose watershed area is entirely within Texas.  The basin's namesake river was named Nuestra Señora de Guadalupe, "Our Lady of Guadalupe," by early Spanish explorers.  From the confluence of its North and South forks in Kerr County, the Guadalupe River flows to San Antonio Bay, which drains to the Gulf of Mexico.  Other streams within the basin include the Blanco, Comal, and San Marcos rivers and Sandies and Coleto creeks.

A major concern in the Guadalupe River Basin is overpumping of the underlying aquifers.  In the past, irrigators, cities in the basin (such as New Braunfels and San Marcos), and cities outside the basin (San Antonio) have relied on groundwater from these aquifers.  Due to the groundwater and surface water interactions in the basin, overpumping has led to reduced base flows in the Guadalupe River and its tributaries.