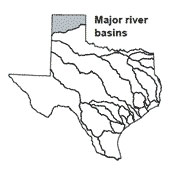 The Canadian Basin is the northernmost river basin in Texas. Due to low precipitation and high evaporation rates that predominate in the region, the basin has a low average watershed yield.  The basin's name-sake river may have received its name from early explorers who thought that it flowed into Canada.  From headwaters in the Sangre de Cristo Mountains of New Mexico, the Canadian River flows across the northern Panhandle of Texas to its confluence with the Arkansas River in Oklahoma.

Smaller streams in the basin include Punta De Agua, Palo Duro, and Wolf creeks.  The Canadian River Compact between New Mexico, Oklahoma, and Texas places limits on conservation pool storage in reservoirs in the Texas and New Mexico portions of the basin.  Limited surface water supplies, often further depleted by drought, are an issue in the basin.  In addition, ground-water supplies, which have historically provided the majority of water used in the basin, are experiencing long-term decline, especially in the Ogallala Aquifer.