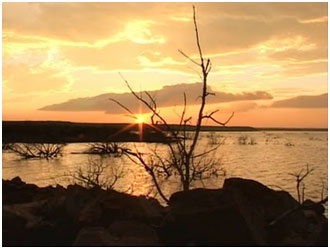 Truscott Brine Lake is located approximately three miles northwest of Truscott in Knox County, Texas on Bluff Creek, a tributary of the North Fork which is a tributary of Wichita River. Truscott Brine Dam is a feature of the Red River Basin Chloride Control Project. The first construction contract on Truscott Brine Dam was awarded on September 27, 1979. The embankment was completed in December 1982. The lake was completed and impounded in 1983. Owned by the U.S. Army Corps of Engineers, this structure is a brine storage area for brine collected at Area VIII of the chloride control project. The dam, built on rock and soil foundation, is an earth-filled embankment of 15,500 feet long and rises to a maximum height of 107 feet above the streambed.

The lake has a storage capacity of 111,147 acre feet encompassing a surface area of 3,146 acres, at elevation 1,499 feet above mean sea level. It controls a drainage area of 26 square miles6.