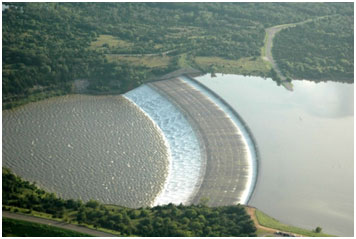 Lake Texoma is formed by Denison Dam on the Red River in Bryan County, Oklahoma and Grayson County, Texas and is located on the border between the states of Oklahoma and Texas. The dam site is approximately five miles northwest of Denison, Texas, fifteen miles southwest of Durant, Oklahoma, and 726 miles upstream from the Red River mouth. The first recorded official report concerning Lake Texoma (then known as Denison Reservoir) was made on January 21, 1927, under the provisions of House Document 308, Sixty-ninth Congress, first session (USACE, 2008).

Denison Dam and Lake Texoma were authorized for construction by the Flood Control Act approved on June 28, 1938, (Public Law 75-791) for flood control, power generation, conservation and recreational purposes. Owned and funded by the Federal Government, the U. S. Army Corps of Engineers designed, built and has being operating this reservoir since 1930's. The dam, spillway, and outlet works were started on August 22, 1939 and completed in February 1944. At that time, Denison Dam was the largest rolled, earth-filled dam in the United States.  The project was put into operation for flood control in January 1944. The first hydroelectric turbine was placed in operation in March 1945, while a second unit became operational in September 1949 (USACE, 2008).