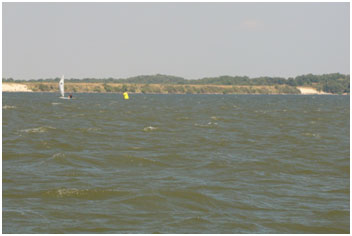 Lake Nocona, also known as Farmer's Creek Reservoir, is located about seven miles northeast of Nocona in Montague County, Texas on Farmer's Creek, a tributary of the Red River. It is owned and operated by North Montague County Water Supply District for the municipal, irrigation and recreational purposes. Under the Water Right Permit (No. 1922) granted on March 10, 1959, the construction of the Farmer's Creek Dam, an earth filled structure with a length of 3,270 feet and a maximum height of 77 feet, began in September 1959 and was completed in October 1960. Deliberate impoundment began spring of 1961. The top of the dam is at elevation of 847 feet above mean sea level. The uncontrolled emergency spillway is located near the left end of the dam and is divided into two levels and 3 sections. The center section (primary spillway) is 100 feet in length with a original crest at elevation 827 feet above mean sea level. The end sections have a total length of 800 feet (400 feet each side) and the crests are at the same elevation, 835 feet above mean sea level. In 1997–98 modifications were made to the primary spillway channel that included a protective concrete cover over the crest. The final grade of the concrete cap is at elevation 827.5 ft. The lake has been providing water to the City of Nocona since then. According to TWDB 2001 volumetric survey, the lake has a storage capacity of 21,749 acre-feet, encompassing a surface area of 1,362 acres, at its conservation pool elevation 827.5 feet above mean sea level. The dam controls a drainage area of approximately 94 square miles.