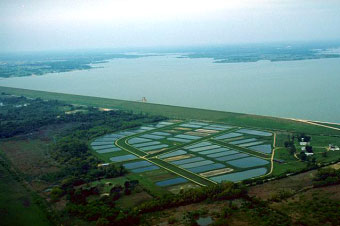 Lewisville Lake is located near the city of Lewisville about twenty miles northwest of Dallas in Denton County, on the Elm Fork, a tributary of the Trinity River. During 1920's the City of Dallas built a dam (known as Garza Dam) on the Elm Fork upstream from the current Lewisville Dam. The Garza Dam was completed in 1927, creating Lake Dallas. However, significant silt accumulation in Lake Dallas prompted the U.S. Army Corps of Engineers to construct Lewisville Dam.

Construction on Lewisville Dam began on November 28, 1948, with deliberate impoundment beginning on November 1, 1954. The project was completed in August of 1955. In 1957 the original dam was breached and Lake Dallas became part of Lewisville Lake. Lewisville Lake is owned by the U. S. Government and operated by the U.S. Army Corps of Engineers, Fort Worth District, mainly as a water supply source for the Cities of Dallas and Denton and surrounding communities. The lake also provides flood control and recreation. The main structure is about 32,888 feet long with a maximum height of 125 feet above streambed. The elevation at the top of dam is 560 feet above mean sea level, while the maximum designed water surface is at the elevation of 553 feet above mean sea level.