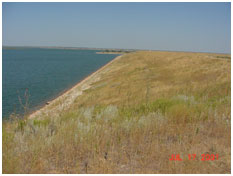 Lake Kemp, named after Joseph Alexander Kemp (1861–1930), is located on the Big Wichita River north of Seymour in Baylor County, off US 183 about forty miles from City of Wichita Falls, Texas. After successfully financing the construction of Wichita Lake in 1901, Mr. Kemp continued to work for a constitutional amendment allowing the sale of municipal bonds to finance the construction of irrigation systems.

After thirty-six years of speaking publicly, chairing groups, and making numerous trips to Austin and Washington, D.C., he succeeded and an amendment was eventually passed and funds were made available to construct two dams (Diversion and Kemp) on the Wichita River to irrigate and control floods in the area3. Construction of Lake Kemp Dam began on February 25, 1922 and was completed on August 25, 1923. The impoundment started on October 1, 1922. In May 1969, the U.S. Army Corps of Engineers redesigned the dam to raise the conservation pool and increased the storage of Lake Kemp.