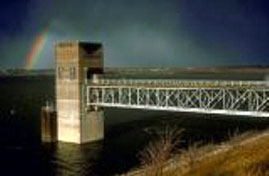 Benbrook Lake is located about ten miles southwest of the city of Fort Worth in Tarrant County, on the Clear Fork of the Trinity River. Federal authorization was granted for Benbrook Dam and Lake under the River and Harbor Act, March 2, 1945, and later modified by Law 782.  Construction for the Benbrook project started on May 27, 1947 and was completed in December 1950. Deliberate impoundment of water began September 29, 1952.

The U. S. Army Corps of Engineers designed the project and List & Clark Construction Company was the general contractor.  Benbrook Dam and Lake are owned by the United States of America and maintained by the U. S. Army Corps of Engineers, Fort Worth District for flood control, flood regulation, and conservation uses that include navigation and recreation.  Benbrook Dam and appurtenant structures consist of an earthfill embankment 9,130 feet in length (including spillway) with a maximum height of 130 feet and a crest width of 20 feet at an elevation of 747.0 feet.

The emergency spillway is an uncontrolled concrete ogee type located near the left (northwest) end of the embankment.  The crest of the spillway is 500 feet in width at an elevation of 724.0 feet and is used for major emergency spillway.  There is a 100 feet wide notch in the center of the spillway that has a crest elevation of 710.0 feet and it is for minor emergency purposes.  The outlet works structure consists of a concrete tower located near the right (southeast) end of the embankment.  There are two 6.5 feet by 13 feet openings, controlled by "broome–type" gates with invert elevations of 622.0 feet.  There are also two 30-inch diameter pipes controlled by slide gates that have an invert elevation of 656.0 feet.  All discharges pass through a 13-feet diameter conduit and are released to a stilling basin downstream of the embankment.  Maximum design water surface may reach 741 feet above mean sea level and the top of flood control pool is at 710 feet above mean sea level. At the crest of emergency spillway, elevation of 724.0 feet above mean sea level, the lake would cover 7,630 acres and store 258,600 acre feet of water. According to the TWDB 1998 survey, the lake had a storage capacity of 85,648 acre-feet, encompassing a surface area of 3,635 acres water at its conservation pool elevation, 694 feet above mean sea level. The drainage area is approximately 429 square miles.