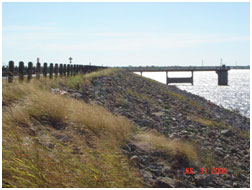 Lake Arrowhead is located about thirteen miles southeast of Wichita Falls, Texas on the Little Wichita River, a tributary of Red River. Lake Arrowhead Dam was primarily designed and constructed for water supply and recreational purposes. The City of Wichita Falls owns the water rights to Lake Arrowhead. It also owns and maintains the dam and appurtenant structures.

On June 1, 1962, a permit was granted for the City of Wichita Falls to construct a dam and reservoir on Little Wichita River in Clay County. The construction began in May 1965 and was completed in December 1966. Deliberate impoundment began in October 1966. Homer A. Hunter of Dallas and J. A. Wolverton of Austin were the design engineers, and the general contractor was H. E. Cummins and Sons. Lake Arrowhead Dam and appurtenant structures consist of a rolled-earthfill embankment approximately 15,900 feet in length (including spillway) with a maximum height of 62 feet. The top of the dam is measured 25 feet in width at elevation of 944.0 feet above mean sea level. The spillway is an uncontrolled reinforced concrete ogee-type structure with a concrete chute at the west end of the embankment. Maximum design water level can reach to 939.55 feet above mean sea level, with a crest of spillway elevation of 926.0 feet above mean sea level. According to TWDB 2013 survey, at the conservation pool elevation of 926.0 feet msl, the lake could storage 230,359 acre-feet of water, encompassing a surface area of 14,506 acres. The dam controls a drainage area of approximately 832 square miles of which 275 square miles is above Lake Kickapoo.