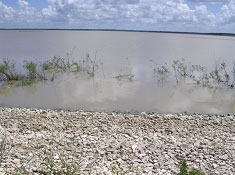 Lake Anahuac (also known as Turtle Bay) is located north of Anahuac in western Chambers County on the Turtle Bayou but is mainly fed by the Trinity River through Big Hog Bayou, by pumping if necessary.  It is owned and operated by the Chambers-Liberty County Navigation District for municipal, irrigation, industrial, and mining supply purposes.  In 1900 the Farmers Canal Company began pumping water out of what was then called Turtle Bay to irrigate rice fields.