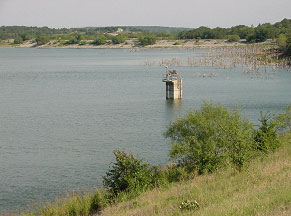 Lake Amon G. Carter is actually two reservoirs joined by a twenty foot tunnel and is located about six miles south of the City of Bowie in Montague County, Texas on Big Sandy Creek, a tributary of the West Folk Trinity River, which is tributary of the Trinity River.  The lake is owned and operated by the City of Bowie for municipal and industrial mining water supply and recreational purposes. The construction of the original dam began in July 1955, one month after the death of Fort Worth businessman and philanthropist Amon G. Carter, for whom the lake was named.  The dam was completed in August, 1956 with deliberate impoundment of water starting in May 1956.