Rainwater harvesting is useful if enough rainwater can be captured and stored to satisfy needs during dry periods. So, how much rainwater can a homeowner expect to collect and store in Texas? Assuming a collection efficiency of about 80 percent, it turns out that this volume is roughly 1,000 gallons for every inch of rainfall that falls on a 2,000 square-foot roof. 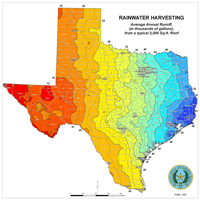 To facilitate a quick and easy way to estimate the amount of rainwater that can be collected from a roof in any location in Texas, we have developed a map (shown on the left) that shows average annual runoff from a 2,000 square-foot roof. The numbered lines on the map are isolines, connecting points of equal average annual runoff (in thousands of gallons).

To use this map, simply identify your location on the map, read the numbers of the two lines that are on either side of the location, and multiply each number by 1,000. The amount of rainwater that you can expect to collect will range between the two numbers. For example, a homeowner in the Abilene area (west-central part of the state) with a 2,000 square-foot roof can expect to be able to collect between 24,000 and 28,000 gallons of rainwater annually.

More information about rainfall distribution, water balance, system sizing, and other aspects of rainwater harvesting are available in The Texas Manual on Rainwater Harvesting, Third Edition (2005) and in the Rainwater Harvesting Evaluation Committee Final Report (2006).