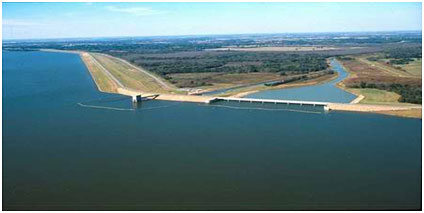 Jim Chapman Lake (also known as Cooper Lake/Dam) is located on the South Sulphur River, a tributary of the Sulphur River about twelve miles north of Sulphur Spring and one mile south of Cooper on the border of Delta and Hopkins Counties, TX.  It is believed that the project was first advocated by area residents, led by local landowners Grover Pickering and Quentin Miller, for the purposes of flood control and water storage in the late 1930s.  In 1948 Congressman Wright Patman requested a feasibility study for a dam and reservoir on the South Sulphur River, and the United States Army Corps of Engineers published a favorable report in 1950.

In the early 1950s the cities of Sulphur Springs and Commerce, along with Delta County, signed on with the project, and the Cooper Dam bill was passed and signed in 1955.  The final dam site was moved 6 miles downstream from original site.

The project was delayed several times before it was completed in 1991. Construction of the earthfill dam began in 1987 and formal dedication occurred on September 28, 1991.  The lake, used to be called Cooper Lake, was renamed by an act of Congress in 1998 to honor Jim Chapman, a former congressman from nearby Sulphur Springs, who served on the House Appropriations Committee and worked on numerous projects including restoration and development of the then Cooper Lake.  Beside flood control, the Lake also supplies water to the North Texas Municipal Water District, the Sulphur River Municipal Water District and city of Irving.

According to TWDB 2007 volumetric survey, the lake had a storage capacity of 298,930 acre-feet, encompassing a surface area of 17,958 acres, at its conservation pool elevation 440 feet above mean sea level. The dam controls a drainage area of approximately 479 square miles.