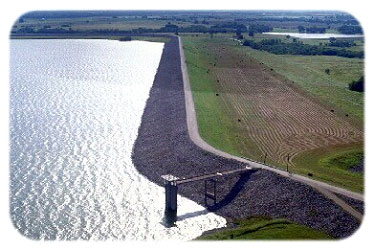 Bardwell Lake and Dam is located about five miles south of the city of Ennis in Ellis County, on Waxahachie Creek five miles above its confluence with Chamber Creek, a tributary of the Trinity River.  Federal authorization was granted for the Bardwell Lake facility under the Flood Control Act of March 31, 1960.  The U. S. Army Corps of Engineers designed the project and M & S Construction Company was the general contractor.  Construction of the dam began on August 28, 1963 and was completed on March 27, 1966.  Deliberate impoundment of water began November 20, 1965.  The reservoir is owned by the U. S Government and operated by the U.S. Army Corps of Engineers for the purposes of municipal water supply, flood control, and recreation.